Is the solar system tilted sideways??

Do you ever think about how cool it is that someone on the opposite side of the earth from you is standing "upside down"--your feet facing their feet? 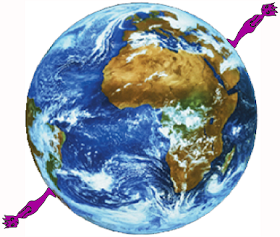 Or even when you travel from one US coast to another, you are standing at a ~45 degree tilt relative to how you were standing before. 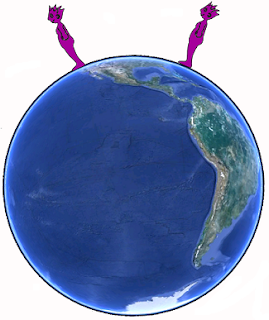 I had thoughts like this swirling in my head during one moonless night on the pacific coast, as the campfire died down and our very own milky way galaxy came into view.

Us, our planet, and our solar system...we all live in the "suburbs" of our milky way galaxy, in one of its spiral arms. 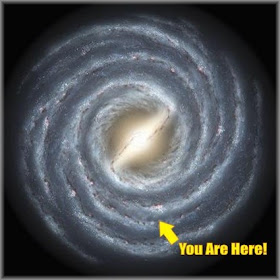 So, when we see the milky way in the sky we can gaze toward the shiny lights "downtown," near the center of our galaxy. We can also gaze at other suburbs of our galaxy, getting an edge-on view of the spiral arms.


The campfire was now completely gone, and as the earth continued to turn, the milky way moved higher and higher in the sky. Pretty soon it was straight overhead--the spiral arms stretched above my head toward the northern horizon and the galactic center at my feet toward the southern horizon.

"The milky way and I sure are aligned tonight," I thought. Pondering this a bit longer, I realized that I was laying down parallel to the plane of our galaxy.

The milky way was huge and cosmically more significant than me, but my body was still oriented in a particular direction with respect to it. Crazy! Had I been laying on the ground oriented west-to-east I would have been floating in space perpendicular instead of parallel to the plane of our galaxy. Think about it!

In order for this to be possible, we--us, our solar system--must be oriented perpendicular-ish to the plane of the galaxy. Something like this:


It turns out I'm not totally bonkers, and the solar system is "tilted" with respect to our galaxy. You can see that in this 360 degree panoramic picture of the sky.

You can see this even better in this image of the sky that was made by looking at infrared light (shifted here into the visible spectrum so we can see it, of course).


The mega-bright line from left-to-right is the milky way galaxy. It looks more bright here than in the image above because infrared light can pass through the dust that normally blocks part of our view of the milky way. The more diffuse blue-ish light is the zodiacal light from our solar system. See, we are tilted by 60 degrees!

*note: The tilt of the earth's axis of rotation with respect to the plane of the solar system and earth's orbit around the sun greatly complicate this whole issue. So, to avoid entering a quagmire of celestial-mechanical-insanity, I'm ignoring it entirely. Please forgive me. If you'd like to learn more, check this confusing stuff out. Also for a different explanation of all this, go here.
LeeBee at 8:58 AM
Share
‹
›
Home
View web version